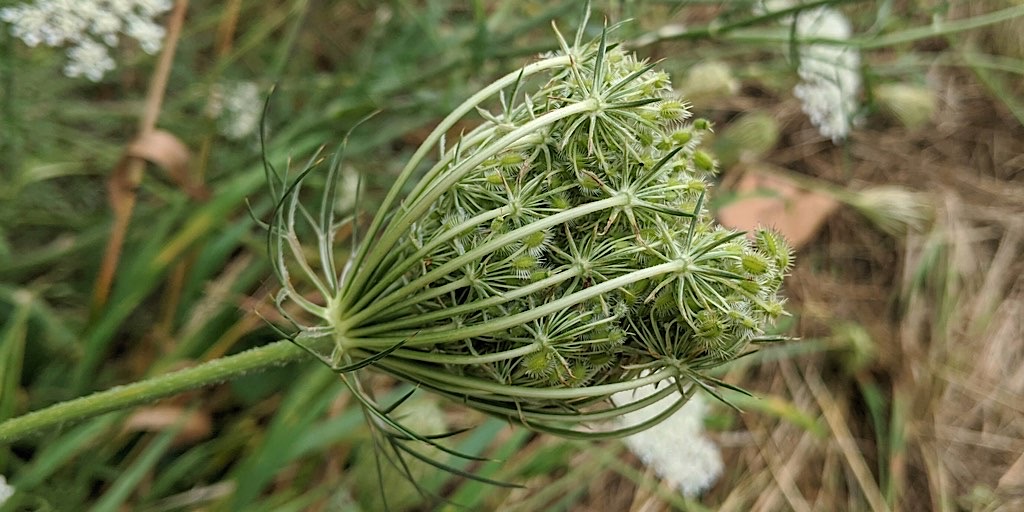 I love wildflowers and there are hundreds of beautiful and intricate species growing in the UK.  It is hard to choose favourites since there are so many fab ones.

But two of my most favourite ones – for very different reasons – are currently in full bloom in the Sharpness Docks area.

Both of them are generally seen there throughout July to September and even into October.

The second plant is wild carrot.  Unlike chicory, wild carrot could easily go unnoticed – or be simply overlooked by a casual observer as being just another white umbellifer, such as cow parsley or hogweed.

However, this secretly magnificent plant not only rewards a closer look but it also reveals a brilliant surprise!

For starters, the plant has the most amazing geometry.  A look at the underside reveals the dramatic three-forked lower bracts which distinguish wild carrot from other white umbellifers.

Wild carrot is also known as Queen Anne’s lace, Bishop’s lace or bird’s nest – its scientific is Daucus Carota.  It is in the Umbelliferae family commonly called the parsley, celery or carrot family.

When in bud, the flower head – or umbel – opens out to form a dome – rather like an inside out umbrella popping back into shape.

As the flower matures, the movement is reversed.  The flower dome flattens into a pancake and eventually inverts.

As the flowering stage finishes, the whole umbel continues to curls upwards, next forming a cup and then an intricate ball encasing the developing seed head.

The forming seeds are spiny and reminiscent of little creepy crawlies – they can be seen in the top photo.

The carrots we eat are cultivars which were long ago developed from a subspecies of wild carrot.  Wild carrot has roots which are woody and inedible.

Where it hangs out and a case of mistaken identity

When in bud, the wild carrot flower heads can be pale pink or white. By hedgerows it can grow several feet high but in open grassland it is typically up to knee height.

So from a distance, wild carrot can be easily confused with yarrow – also white or pale pink but with very feathery leaves up the stem.  Yarrow can be seen growing along the canal path and in the chicory meadow – it is in the same family as chicory!

Wild Carrot is instead seen growing sparsely in the very exposed Severn area just north of the tidal basin, and then more abundantly in the shelter of the hedgerows as one walks towards the wind turbine area.

It can also be seen along some road verges such as the road from Berkeley to Sharpness where it is recognisable from a passing car purely by its distinct seed head!

If one pays some attention to the hedgerow, it becomes curiously apparent that very often – but not always – there is a black beetle or other insect exactly in the middle of the flower head.

There is only ever one such insect per flower head, and it is always slap bang in the middle!

These black dots can be made out in the photo here.

Wild carrot is sometimes planted as a beneficial weed to attract pollinators to crops.

A close inspection reveals that the centre black dot is not an insect but is in fact a small single flower which is different to the other little white florets.

This centre floret is typically an inky purple but this year I’ve seen plenty that are the richer red seen in this photo.

Occasionally, the centre may have two or three dark flowers.  I discovered an unusual specimen with a whole bunch of red centre flowers as shown in the photo below.  I have no idea if this is very rare.

Botanists have debated the purpose of the dark centre flower for over 150 years.  Back then the opinion was that it was a genetic oddity that served no purpose.

Many modern botanists believe it is a trick to fool insects into visiting the flower.

But research studies have produced contradictory results and a very recent study found no conclusion either way.

And it is curious that some flowers have the ‘insect’ flower and some do not, even in the same patch!

What better place to look than the World Carrot Museum:

Warning:  Be careful to correctly identify any umbellifer before touching and especially before eating.  Many are deadly poisonous and some damage skin.  Wild carrot is harmless.

STOP PRESS:  After writing the above, I was doing a final fact check before publishing.  Via a search I stumbled across a relevant, current news story reported on 17 August 2020 on The Telegraph site.

A former soldier who ran popular survivalism courses in France has been charged with manslaughter.  It is claimed that he identified deadly ‘hemlock water dropwort’ as harmless wild carrot.  The course leader denies the claim.  After the plant was cooked and eaten, sadly one young man died and eight others were hospitalised and extremely ill.

There is a large amount of hemlock water dropwort growing in various locations in Berkeley Vale due to its naturally wetland landscape.

The plant is easily distinguishable from wild carrot though.  However, it can more easily be mistaken for parsnip and supposedly even tastes nice like parsnip – though I do not know who lived to tell that tale!

The parsnip like roots bring us to an alternative, highly descriptive name for this plant which is Dead Man’s Fingers – though that could also be an episode of The Sopranos.

Horses and dogs as well as humans have been tempted by and fallen foul of this highly toxic plant.

However, it is a very important plant for insects and other wildlife.  Very surprisingly, it is a food source for water voles which do inhabit our local Little Avon.  Water voles have adapted to eat a great many different plants, even this one.

Hemlock water dropwort is a very lush, bushy plant with attractive parsley type leaves which are a relatively vivid green.  It flowers earlier than wild carrot.

Hemlock water dropwort typically grows in damp soil and ditches and along other waterways but it is increasingly spreading into fields and gardens.  The seeds survive fifty years in the ground and the roots are nigh on impossible to remove without major soil removal.   Chemical use is rightly restricted by waterways.

It is prevalent beside the often muddy footpaths between Berkeley and Sharpness – whereas wild carrot grows in well drained, poorer soils such as found around Sharpness Docks and brownfield sites.

The dropwort in the story was found in a wood!  So the lesson is to be careful rather than to be fearful.

Copyright: all rights reserved on all images & articles.